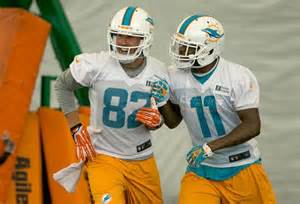 Much of the focus the offseason is on Ryan Tannehill. Will the new offensive line protect him? Will he make the next step? Is he this franchise’s “franchise” QB? While those questions are valid, the answers will always depend on other players as well. No matter how good Tannehill plays he will always depend on the men catching his passes.

Today I take a look at those receivers. While Tannehill gets much of the credit and often all of the blame, the receivers are the ones we are watching at the end of the play.

Wide Receivers: This is a solid group. Talented players who just needed a little push to be great last season. Who will still be standing this season for that push?

Brian Hartline: For some reason Hartline is dismissed by many. Somehow there are those that do not believe in him as a top receiver. Good speed, great hands. Two thousand yard seasons. And still he just is not good enough for some. He is the most consistent receiver Miami has had in years. He is Tannehill’s security blanket. I expect him to get his third 1000-yd season this year, securing his place in Miami Dolphin history.

Mike Wallace: Contrary to popular belief Wallace did not have a horrible season last year. 900 yds and 5 touchdowns is not bad. I blame expectations. Many are concerned with the chemistry between Wallace and Tannehill. Tannehill gets a lot of blame for not hooking up on those long passes but I do not agree. Other receivers were more successful on the long passes than Wallace so it does not seem to be only a quarterback issue. What I want from Wallace is for him to fight for the ball more this season. When that ball is in there air it should be the receivers ball until someone takes it away from him. So go get the ball.

Rishard Matthews: Matthews had his coming out party this season. When Brandon Gibson went down he showed that he can play at this level. He may still have a fight on his hands for a roster spot but I believe he can get it done.

Brandon Gibson: Of all the veteran receivers I worry the most about Gibson. It is not a lack of talent or production that concerns me. It is simply the fact that Matthews and rookie Jarvis Landry may be able to do his job. And for less. Add to that his recovering from injury he might end up as a surprise cut.

Jarvis Landry: Wide Receiver was absolutely not a need for this team coming into the draft. The receiving corps was already rock solid. Landry is a luxury. He can be the cherry on top. There are those that believe he can be an Andre Johnson type receiver. A solid playmaker. Lets see what he brings.

The rest: Most of the rest are simply camp bodies. Armon Binns looked good last offseason and Stephen Williams has looked promising during the OTAs outside of them I do not expect much. The best thing that Binns and Williams bring to the table is size. At 6’3″ and 6’5″ respectively they have much more length than the rest of the position.

Charles Clay: Clay had a breakout season. He showed the ability to be a big play seam threat. Now do it again. Do it while everyone is watching you.

Michael Egnew: Egnew was expected to be a playmaking tight end when he was drafted. We are still waiting to see that. I believe his best role is as Clay’s primary backup.

Dion Sims: A decent in-line tight end. He flashed once or twice last season but did not seem to be anything special to me. He will be pushed hard by rookie Arthur Lynch. Depending on how many tight ends we keep he may be the odd man out.

Arthur Lynch: My favorite pic of the draft. I watched him catch pass after pass from Aaron Murray at the University of Georgia. While he is not going to stun anyone with his speed, he is very adept at making plays in the passing game. He should eat in the intermediate range that opens up due to Clay’s play down the seam. I expect him to play early and often.

The receivers should do a lot to help Tannehill excel this season. The final cuts may be hard decisions to make. It is a very good place to be.