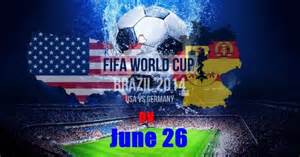 This Thursday the US Men’s National Team will play the most important match of their lives. Beating Germany would make a statement. Beating Germany would declare that the US team is ready to make that next step to becoming an actual power in the soccer (or futbol if you prefer) world. So why do so many seem to want the US to play for a draw?

For me this actually started with the Germany-Ghana match. While I was cheering on Ghana(for what looked like an upset of Germany), a friend of mine tried to convince me that I should be cheering on Germany. His rationale was that it would give the US team and easier road to the knockout stage if Germany won. It would have. If Germany won all the US would have needed was a draw, which is what they got. I did not care. For me it is nice and simple. I wanted Germany to lose because Germany is one of the best teams in the entire World Cup, if there is a chance to prevent them from making the knockout stage then you take it. As far as the US team is concerned: Take Care of Business.

It is real simple win and you get in. That was true against Portugal, it is still true against Germany. Win and we are in.

I feel like I am channeling Herm Edwards here,

“You Play to Win the Game!”

It was true when he said it as a football coach, it is still true now.

Playing to win is the only way to do it.  Playing for a draw-there are too many things that can go wrong. Athletes are programmed to win, not to tie.  Trying to draw against one of the best teams in the world is courting disaster. You play to win, you may settle for the draw. But you always play to win. Come Thursday the US team will play to win and all will be good.