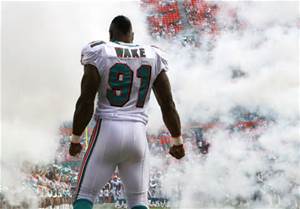 The Miami Dolphins defensive line was a strength of this team last season and it continues to be one this year. Even with the departure of Paul Soliai and the 4-game suspension of last years first round pick Dion Jordan this unit should continue to impress.

It is not simply the talent on the field it is also the depth that promises consistent play no matter who is out there.

I will start with the Defensive Ends.

Cameron Wake: Wake is the star of this unit, maybe of the entire team. After joining the Dolphins in 2009 after a successful run in the CFL, Wake has shown that he is an elite defensive end. Providing 8.5 sacks as well as one of the plays off the year in his walk-off safety against the Cincinnati Bengals 2013 was another excellent season from him. The only question with Wake is how long can he perform at this level. He is 32 and he did miss some time last season to injury. Keeping an eye on his playing time might be a wise move by the Dolphins.

Olivier Vernon: This third year player out of the University of Miami had his coming out party last season. Posting 11.5 sacks opposite of Cameron Wake. At the beginning of last offseason he was not even expected to start, but he held off Dion Jordan to keep the job. Now it is time for Vernon to prove last season was not a fluke. After a full season starting I expect him to be more consistent and effective, elevating the performance of the entire line.

Dion Jordan: The Dolphins 2013 first round pick has an unique combination of size, speed and agility. How unique? Jason Taylor kind of unique. While he saw his playing time limited last season while recovering from injuries, he came into this season in great shape even adding some muscle to help against the run. Recently it was announced that he will serve a four-game suspension for violating the NFLs PED policy. While some make a big deal out of this, I believe everyone is entitled to a mistake. As long as Jordan learns from this and does not become an habitual offender there should be no problem. He will be back by the beginning of October adding another weapon to this defense.

Derrick Shelby: Shelby provides solid depth to this line. Still a young player with room to grow, he should be a regular part of the defensive end rotation this season.

Terrence Fede: The rookie draft pick from Marist contributed over 30 sacks during his college career. Still very raw, he has the kind of athleticism that teams covet at the defensive end position. Fede looked to be an easy choice for the practice squad this season, but with the Jordan suspension he may sneak onto the main roster at the beginning of the season.

The Defensive Tackle position will look a little different this year. Gone is space-eater Paul Soliai replaced by Earl Mitchell. It looks like defensive coordinator Kevin Coyle is looking for versatility at the position.

Randy Starks: Starks signed a two-year $12 million dollar contract to return to the Dolphins this offseason. A two-time pro bowler he is effective working at defensive tackle and also at end. At thirty he is one of the older members of the defense but still can perform as a full-time starter.

Jared Odrick: Like Starks, Odrick has the versatility to play inside or outside. The former first round pick contributed 4.5 sacks last season bringing his career total to 15.5 for the Dolphins. Entering into a contract year, expectations should be high for Odrick this season. I expect to see him excel in his second season as a full-time defensive tackle.

Earl Mitchell: Coming over from the Houston Texans, Mitchell is expected to fill the run stopping role Soliai once manned. If nothing else he should be a solid member of the defensive tackle rotation.

A.J. Francis: Francis impressed in last years preseason. Unfortunately he did not make the final 53 man roster, being picked up by the New England Patriots and spending several weeks on their roster. By the end of the season he was back on Miami’s roster. With a season of experience he has a good chance of making the roster and providing depth in the defensive tackle rotation. He also has a chance to surprise and steal snaps from the starters this year.

Even with a suspension and the ongoing threat of injury that always exists I expect this line should continue to be a strength. It is very simple. Next man up. The depth and talent are there. Each and every man simply needs to step up when his number is called and I expect nothing less.