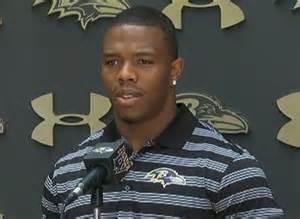 There are some columns I try not to write, some subjects I try to avoid. Often it is a simple case of asking if I am the person who should be talking about this subject. Then again sometimes an issue keeps gnawing at you and you realize that like it or not it is time to bleed at your keyboard.

The entire Ray Rice situation is one such issue. I will not go into detail about the case here. Surely you can find it written about at length elsewhere across the net. Simply put due to an incident with his fiancé (now his wife) in Atlantic City, Rice was accepted into a pretrial intervention program in May. This last week the NFL chose to suspend Rice for two games along with a fine. While a TMZ video shows Rice with his seemingly unconscious wife leaving an elevator, no one knows for sure what took place in that elevator.

If they truly feel that way then where is the outrage against the court of law?

If they feel that Rice only got a slap on the wrist from the NFL then what did the criminal justice system give him?

Something on the video from the elevator convinced the justice system and the NFL to decide as they did. Frankly, thinking anything else is simply judging by facts not in evidence.

That is what I feel about the Ray Rice case. However, that is not where the story ends. Domestic violence is a terrible plague on our society. This case raises the voices of outrage over this subject. The only problem is that it is not creating a discussion as much as a lecture. Everything is fine if you agree with everyone else. Do not even think of offering up a different opinion though.

Domestic violence is not simply a man physically or emotionally abusing a woman. It goes the other way as well.

I know. I have experienced it first hand. While some may scoff at the suggestion of men suffering from abuse at the hands of their wives and girlfriends it does happen. Often times it simply is brushed under the rug. Pride is many men’s greatest sin.

What man wants to admit the woman he loves is hurting him?

Who would believe him?

A conversation about domestic violence cannot, should not only cover part of the story.

I have said over and over again: It is never ok for a man to lay his hands on the women in his life. We should be there to protect them not endanger them.

At the same time, women it is not ok for you to assault the men in your lives either.

None of this excuses whatever happened in that elevator. It just highlights that this issue is not as simple or one-sided as some may want to make it.

We all deserve better.